Unusual find, in my backyard!!

I've been doing some garden expansions the past few years, combining smaller gardens into larger ones and as the shrubs and trees grow larger, expanding the gardens around them. I do this mostly, to make my husband's job easier. He uses the lawn tractor and often gets hit in the face by growing trees and shrubs. 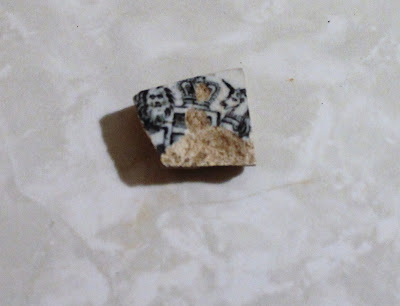 Last year I came across this little piece of pottery, while expanding one of the gardens. We know from stories and from seeing the several rock piles throughout the property,  that other people lived here many years ago. We    built, 39 years ago and before that it was pasture land.
Last year I came across this tiny piece of china. It had
definitive markings on it, with the lions head and the unicorn in the blue and what appears to be a crown in the middle. I could find little about this small piece. I'm hoping to find another like it to  make a set of unique earrings for myself.


Today, I found this, when expanding another garden. This garden is located around a large rock that was used as a containment spot for other displaced rocks. It has become my rock garden.
My quick research tells me it is called  an 'Antebellum Blacksmith Made Plantation Hoe'.
Antebellum, meaning after the War of 1812 and before the Revolutionary War. That puts it between 1815 - 1861, probably made in the U. S. A.

But it was found here in Canada, in southern New Brunswick, near the banks of Darling's Lake, leading to the Hammond River, then to the Kennebcasis River and on to the Saint John River.  In older times, I've been told, people traveled the rivers rather than the roads.

Thanks for checking out my post!! I love reading your comments. Don't forget to include your link, so I can check out your post, too!

Happy to Have You...

Kathy
Darling's Island, NB, Canada
I'm a retired Palliative Care Nurse. After raising four beautiful daughters and finishing up work, it was time to have some fun. Photography, blogging, gardening, hiking and spending time with family are that for me. I hope you'll drop by to visit with my blog and please,drop me a line to say you visited. If I could provide you with a cup of tea or a glass of wine, I would do that, too.